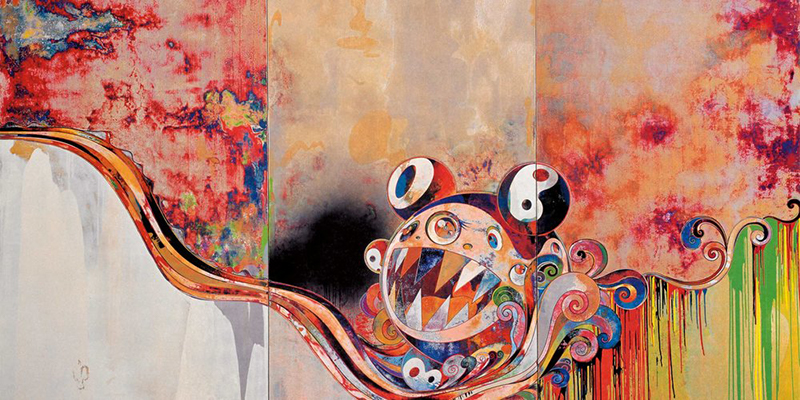 Japanese artwork has had a great deal of influence in the modern world of contemporary and modern art.

Common throughout traditional homes in Japan and increasingly popular around the world, this is one cultural export from the country that has become an emerging trend.

Japanese Art, as specific as we may refer to this broad and expansive style of art, is really a reference to a wide range of styles and is often grouped into 2 main categories, namely:

Of all the different styles of Japanese art, they can be divided into two broad groups, namely, traditional art styles and modern art styles. Both of these represent the trends and styles of different ages, with the traditional ones representing the old Japan, while the modern one reflecting Japan we know today.

To begin with, let’s get a better understanding of these two different classifications.

A Visual Guide to the Various Forms of Japanese Artwork

Numerous art styles exist throughout Japan. All of these can be divided into two groups, namely, traditional and modern Japanese art. Read below to find out which style of artwork would look good in your home.

The traditional Japanese art developed throughout the long history of Japan, going back several centuries. During this period of time, the art form underwent numerous changes, many of which remain even today.

During this period of time, the art form underwent numerous changes, many of which remain even today.  This traditional style of art is centuries old and can often seem outdated–however, as with any other form of art, Japanese artwork is a timeless concept that adapts and changes with its respective time period and looks visually and conceptually beautiful for any person with an appreciation for classic artwork.

These truly unique, awe-inspiring artwork as paintings decorates beautifully into a modern home.

Find this painting pictured above here. 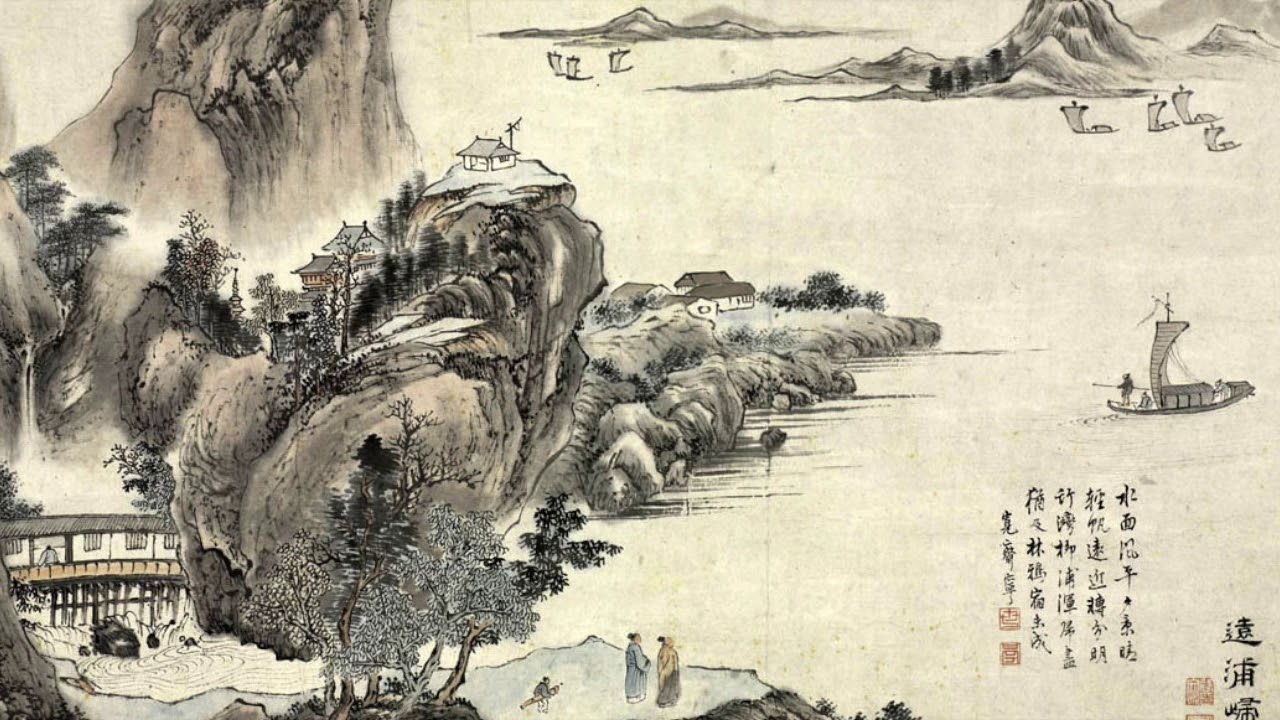 The most ancient Japanese art set the style and foundation for the newer styles that emerged later on. What is most fascinating is that the concept of simplicity became an integral part of Japanese styles. The most common themes used in these ancient paintings are that of nature and traditional life.

With this ancient art style, simple artwork depicting the lifestyle of ancient Japan is the most prominent theme. Black and white color palettes were utilized heavily during this period, resulting in artwork that was simple, easy going, and most importantly–visually and conceptually respective to its time period and people living in Ancient Japan.

They are similar to the ancient Japanese style, with the exception of the way they were created. In addition to it, the types of subjects or themes greatly expanded as well.

For example, the subjects expanded into other elements such as mythology, while the styles used included ink, brush, wooden blocks, etc. Most of the Japanese prints you find today are usually old Japanese art.

These are the artworks that place emphases on calligraphy. Using characters called Kanji; the artworks may either have a single letter or multiple ones.  Also, Japanese calligraphy art may be mixed in with actual artworks, or be used as a standalone. 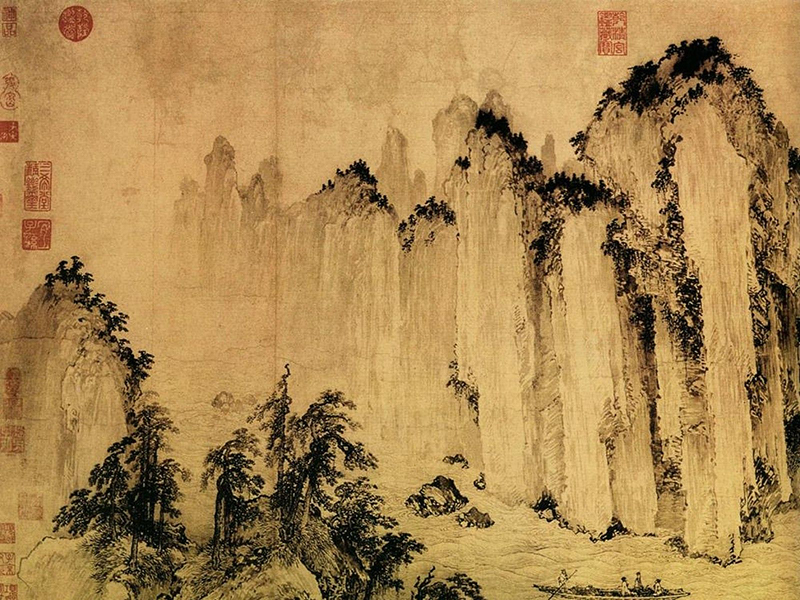 The landscape paintings are some of the most common and have a great deal of emphasis on the landscapes. Quite often, the landscape of focus is not any random landscape, but that of Japan. A good example of this is the paintings of Mount Fuji. 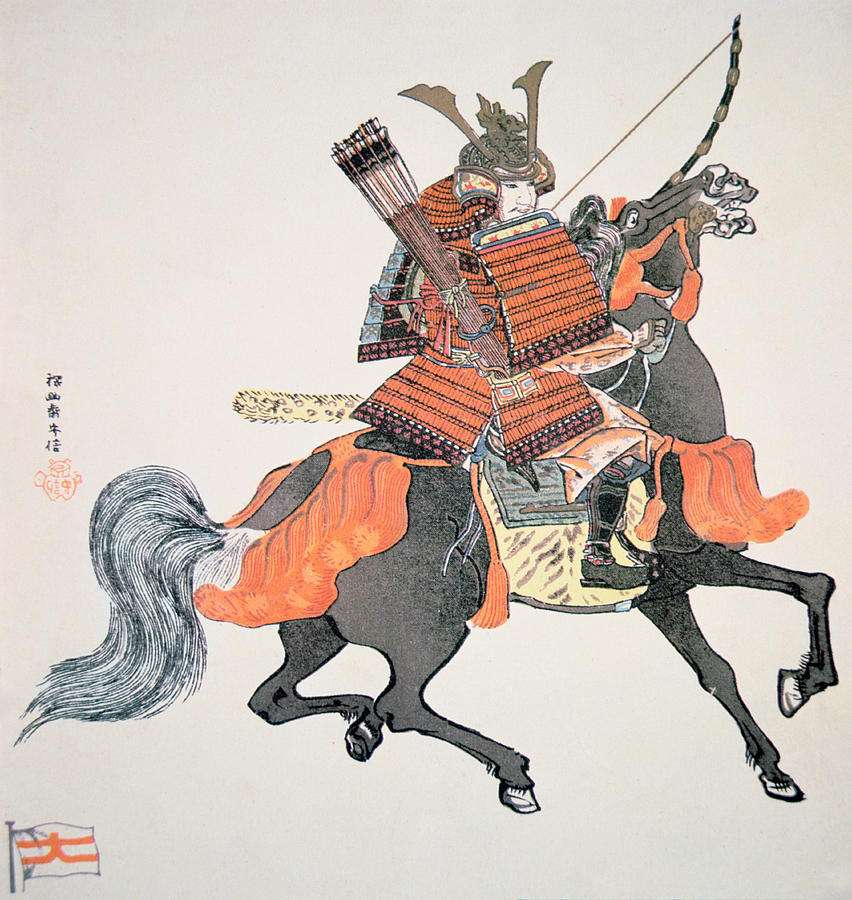 Another important painting style used by the Japanese are paintings of a samurai. Made famous by Hollywood, the Samurai were highly skilled and trained warriors in Japan. They have become fairly immortalized as part of Japanese life, one of the ways is through paintings.

A lot of the Japanese samurai art depicts the life of a samurai, from their training and hardships to their victories.

Find the painting pictured above here. 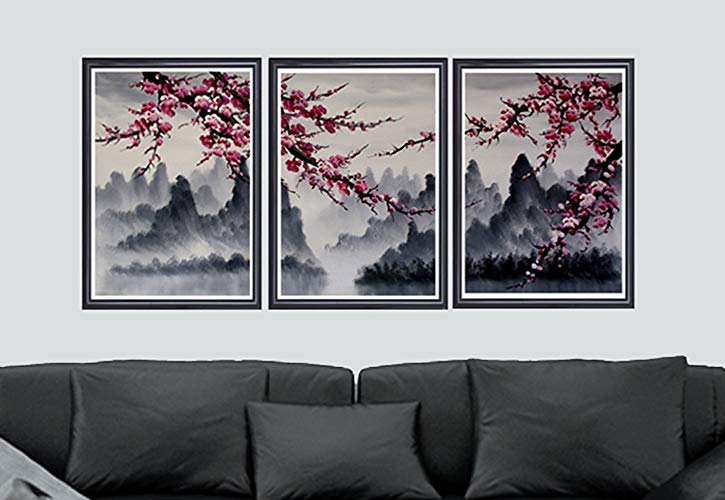 Of all the depictions of nature, one of the most important happens to be that of cherry blossom.
The cherry blossom tree is a well known and fairly common tree in Japan, famous for its beautiful pink flowers.

The cherry blossom tree has become an important part of Japanese culture, with numerous paintings making the tree an important subject of the artwork.

Find the painting pictured above here.

The term ‘Modern Japanese Art’ is not really a reference to a separate art form as such, but rather one which is an adaptation of the traditional styles, into a modern form.
In other words, modern Japanese art can be described as an adaptation of traditional styles to suit the modern era, where the core styles remain fairly the same, while other variables may be altered significantly.

Also called ‘Japanese modern art’, they are one of the most recent styles that emerged in Japan, and trace their peak to the early part of the 20th century.
The origins of this art style have its roots in Europe, where modernist and postmodernist art styles were becoming mainstream.

Japanese contemporary artwork translates beautifully into a modern home. This style of art is often vividly colorful, utterly creative, and most of all–these paintings make perfect centerpieces in a home.

Of all the famous Japanese contemporary artists of this generation, Takashi Murakami has transcended contemporary art in Japan to new heights with his incredibly creative, vivid and beautifully bizarre artwork.

The same principles were adopted by other comtemporary Japanese artists, who blended it with their own principles of elegance and simplicity. The end result was the Japanese contemporary art that we know of today. 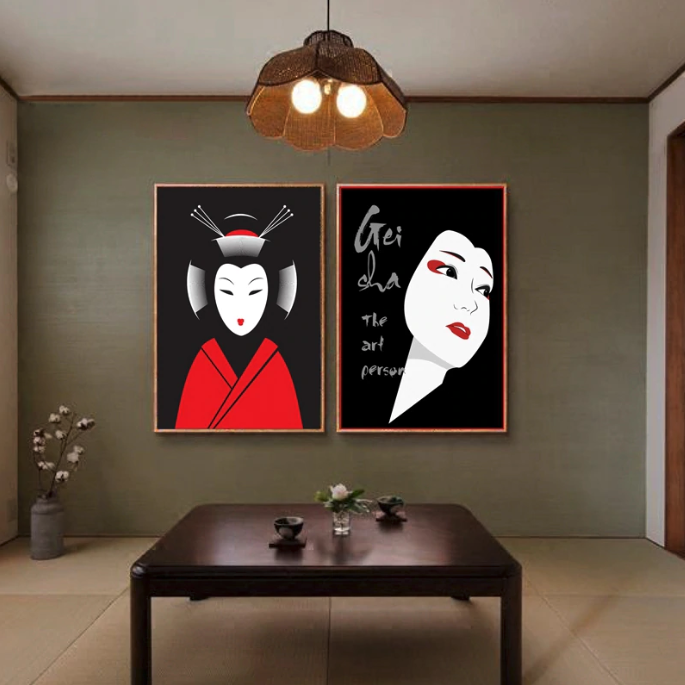 This is yet another modern art style that emerged around the turn of the century. As pop culture became a hit and Japanese artists began to embrace this new form of entertainment, the art styles began to shift as well in this new direction.

The newer elements that took hold of Japanese society were no longer the old themes of nature, family and so on, but popular cultural elements such as anime, manga, pokemon, the concept of ‘Kawaii’, etc. Japanese pop art is most popular among the Japanese youth, who have taken a liking to it more than any other generation.

It is rather easy to recognize Japanese art. Examining the style of art throughout history, you would notice that many of the artwork share similar characteristics–in that they share a common theme and are appreciative of older styles of art. Many of the art styles that originated from the early days of Japan are still prominent today.

These are one of the most common styles of Japanese paintings, which depend largely on the use of ink to create artwork. The paintings are usually characterized by a single color and sometimes a few more. 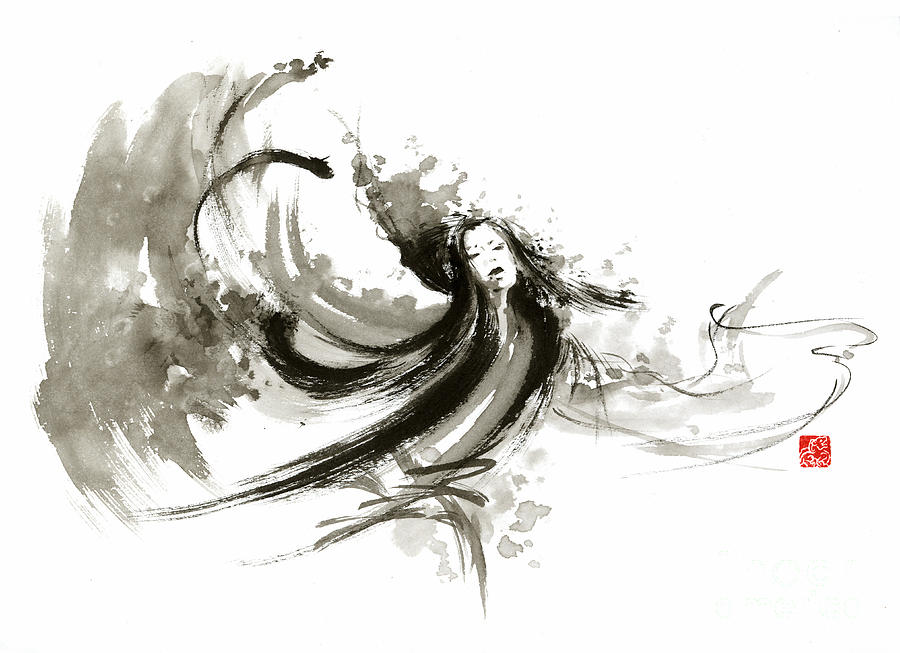 Japanese brush paintings are paintings that are made using brushes, whether traditional ones or their modern equivalent.  The paintings are generally either monochromatic or color. Also, they are characterized by brush strokes, ranging from the simple to the complex.  Brush strokes often tend to be used for Japanese characters such as Kanji, where each character is made up of several brush strokes. 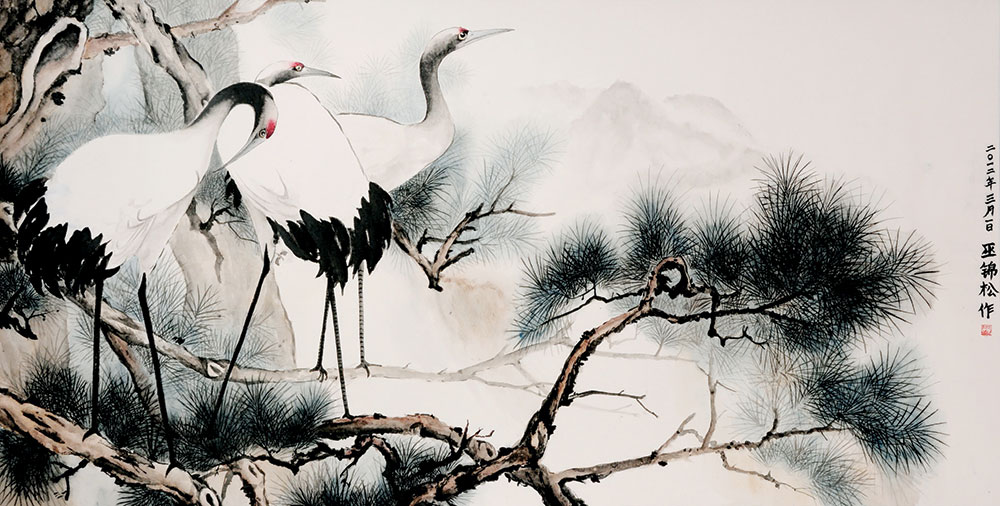 These are largely related to paintings where the core subject is the various themes of the artwork, rather than inscriptions and calligraphy.  Also, Japanese watercolor paintings are by far some of the most color intense of all Japanese paintings, given the variety of pigments that are used.

Japanese drawings are used in places where the emphasis is more on the core concepts such as an outline, sketch work, and illustrations, as opposed to completed artworks. These are more common in pop art and other forms of modern Japanese artworks, where there is a great deal of focus and emphasis on illustrations.

In addition to certain principles used for the paintings, there happen to be similar ones for decorating homes as well.

This is something that is rather common throughout all traditional Japanese homes, where all artworks are subjected to certain restrictions and rules.

Given in the details below are some of the most important principles used when decorating a home with traditional Japanese paintings:

Do Not Use Too Many Paintings – This is one of the most commonly observed aspects of Japanese paintings. Regardless of the room in which they are used, traditional Japanese homes rarely have more than a few paintings in the rooms.  There are very few paintings in a room, which adheres to the larger principle of maintaining simplicity and harmony with everything else.

The Artwork Should Be In Compliance With Feng Shui – Feng Shui is a fairly popular concept in eastern Asia, including Japan. The Japanese art used should be in accordance with the rules of Feng Shui.

Keep The Paintings Protected From Elements – Among the many different elements that you should keep the paintings away from, are strong sources of heat, as well as any place where there are moisture and humidity.  These tend to damage the painting, either directly or indirectly. From erasing the paint to damaging the canvas, there is a great deal of damage that can occur when the Japanese paintings or any paintings for that matter are exposed to the elements.

Color Scheme of the Room – This is another important rule to take into consideration. The artwork should be in accordance with the color scheme of the room, where it blends into the larger theme, rather than standing out.

Each culture has their own distinct and unique style of painting that represents their culture as a whole and their experiences. Japanese paintings have become quite famous in history. Most notably, is the Japanese Wave Painting, Hokusai, and paintings of landscape and nature.

Also referred to as the ‘great wave off Kanagawa’, ‘The Great Wave’ or simply, ‘The Wave’, it is perhaps one of the most well known Japanese paintings. It is a good example of Japanese wave art.

It is a depiction of giant waves in the ocean, with Mount Fuji in the background and three boats in the waters just below the wave. In addition to this, there is also an inscription bearing the title of the artwork and the artist’s signature.
The dating of the painting is somewhere between 1829 and 1833 and is a woodblock painting by an Ukoyo-e artist named Hokusai. The time period of the painting was during the late Edo period, and was part of the painter’s series called ‘Thirty-six views of Mount Fuji’.

His most famous painting was that of the Japanese Wave Painting, part of the larger collection of “Thirty-Six Views of Mount Fuji”, for which he gained a lot of fame.

In addition to this, there are numerous other Hokusai paintings that he created, such as the following:

Japanese Mountain Painting – These are the paintings that have become fairly popular in japan since ancient times.
Given that Japan is a mountainous country, it is only natural that they have become an integral part of Japanese paintings. This includes everything from the world-famous Mt. Fuji to the peaks around smaller towns and cities in the country.
Also, the styles used for these paintings range from the ancient art styles to the modern pop ones, and everything else in between.

As whole, Japanese artworks are some of the most interesting and unique forms of art styles in the world.

Whether the traditional or modern ones, they happen to be something very unique and interesting unlike anything else found in the art world.
So if you are interested in finding paintings for your home, you could consider getting a Japanese artwork. It might just be what your home needs to improve the ambience.

EMOOR Futon Review: Japan’s Secret to the Best Sleep Ever

TheBedLyft.com is a participant in the Amazon Services LLC Associates Program, an affiliate advertising program designed to provide a means for sites to earn advertising fees by advertising and linking to Amazon.com.

This blog does not collect any personal information except that which is freely shared publicly through comments or other means.

Scroll back to top